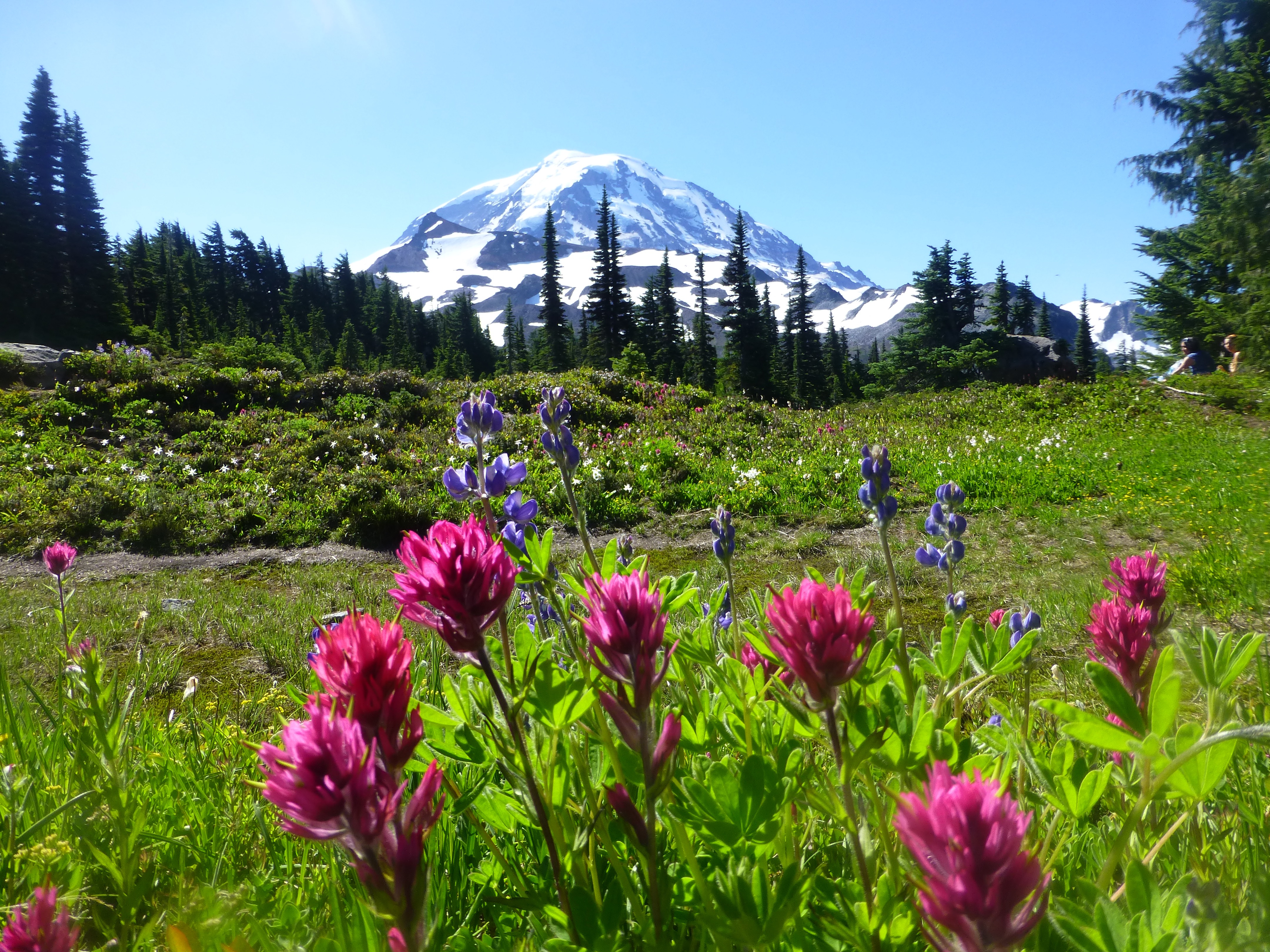 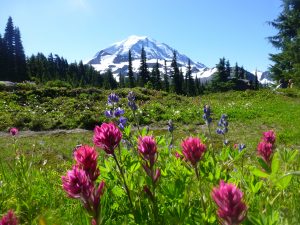 Apryle paged through the Washington Scrambles book that we had yet to open and came across a route in Mount Rainier National Park. Our objective was to summit both Echo Rock and Observation Point; two small prominences that flank the 14,111 foot volcano. We set our course for the southeast and navigated the paved four lane highways, the county roads and the dusty wash boarded forest road to our starting point at Mowich Lake. The area around the lake was packed but fortunately the trail was sparsely populated.

We began our initial approach in a densely forested ravine that eventually slanted upward toward our first checkpoint – Spray Falls. We made the quick offshoot down to a vantage point and then continued our quest. Once we broke tree line the vibrant array of alpine wildflowers took center stage. A quick glance upward revealed the namesake of the park and all the while the trail silently guided us toward our destination.

In less than three miles on the trail we enjoyed dense forest, waterfalls, alpine wildflowers, and snow capped peaks. In order to reach the intended scramble we deviated from the main Spray Park trail and followed snow fields up to the final approach. The rock was a mix of slate, medium sized boulders, gravely scree and friable igneous rock. This made the upward progress slow to a crawl while Apryle and I debated which step to take next. We were careful not to cause rocks to tumble down to the person below and were sure to check that the solid rock hold was not going to crumble off with our weight.

Eventually we turned back just shy of the summit after weighing the risk/benefit ratio. We slid back down the scree slopes, boulder hopped the rocky sections, and glissaded the snow fields back to the main trail. After rejoining the trail we hopped to make a short loop out of the hike, but we quickly realized that we were in it for the long hall when we descended to Carbon River. We were not too worried about the added distance, because we had enough water and calories.

Unfortunately after about seven miles it was clear that our time in the alpine was over and that we were below tree line to stay. Although our surroundings were still beautiful, I find the alpine to be the pinnacle of wilderness aesthetics. We reached the suspension bridge, crossed Carbon River and consulted two hikers and their map. We made a left turn toward Ipsut Campground following the torrential waters to the second river crossing. This bridge took us back across the river and was slightly less grand of an engineering feat, but none the less a much safer method than fording. 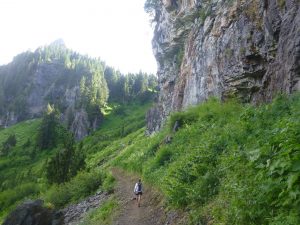 Here we followed the other bank of the river until we reached the first switch back in a series of dozens. The steady climb led us to between rocky ledges and the hill side was thick with blooming shrubs and forbs. The Cascade Frogs jumping onto and off of the trail escorted us to a small pass between imposing cliff sides. Miles 17 to 19 were some of my favorite of the entire day, I loved the grand exit and the way the canyon funneled us between the narrow pass, while rewarding us with unobstructed views of the valley below.

The last stretch emptied us back into the crowds, it was as if the pass was a portal back into congested civilization. Like most trails, seeing other hikers indicates there must be less than a mile or two to go. The trail wound around Mowich Lake and we finished up at the parking lot with about 20.4 miles total. I stopped the watch at 6:43:49, with the bulk of that time spent scrambling up and down from Echo Rock. The total vertical gain was 10,541 feet. It was a beautiful hike/run and overall I do not think the effort will negatively affect my White River 50 race.