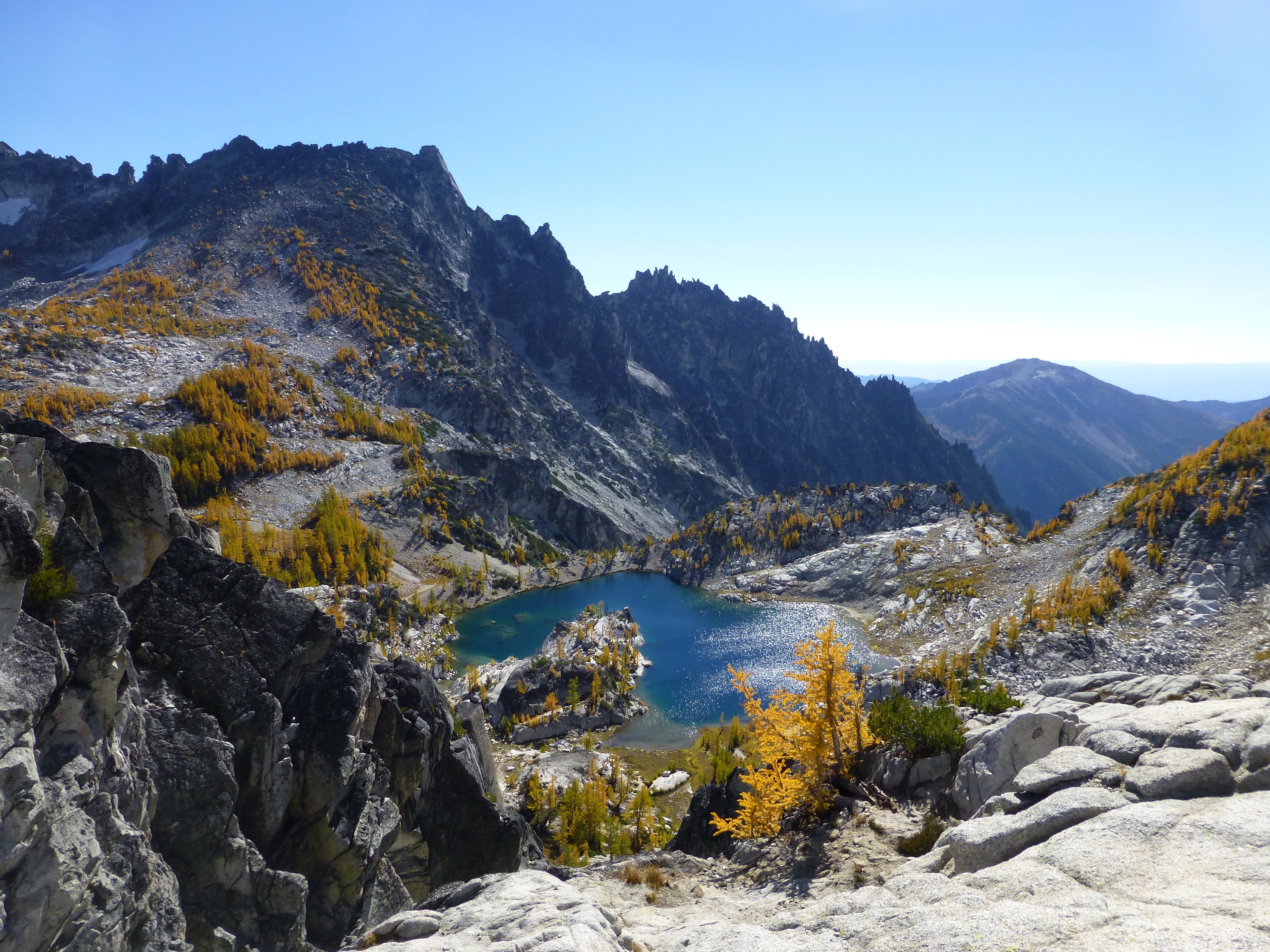 I have lived in the state of Washington for nearly three years and it is difficult to imagine that I had not yet experienced the Enchantments. Apryle and I have discussed doing the loop many times, but for some reason we never followed through with the trip. I suppose after running, kayaking, hiking, and climbing in some of the most extraordinary places in the state on a weekly basis, we assumed that the hype surrounding the Enchantments was unfounded, I mean how much different could it really be from many of the other places we frequent.

However, its beauty on an early autumn morning is unmatched by any landscape I have seen before. It is without a doubt my personal favorite place in the United States. I have run so many spectacular miles from the high desert to the rain forest, to the pristine alpine that I have admittedly become a little jaded and desensitized by stunning landscapes. Therefore, when we started the hike we curbed our expectations.

We began the journey with a small group of runners: our good friend Adam, and three other Japanese Gulch Running Club members Abram, Nick and Tim. We parked at the Stuart Lake trailhead and hit the trail around 7:30 AM. The trail begins with a gradual climb through a thick coniferous forest to Colchuck Lake. Once at Colchuck Lake, we got our first glimpse of Aasgard Pass in the distance. The view was impressive, jagged granite peaks with views of Colchuck Glacier and large talus fields punctuated by green vegetation giving way to still, turquoise waters below.

We skirted along the lake, passing by sandy beaches, and then boulder hopped our way to the base of the pass. I thoroughly enjoyed the ascent up Aasgard Pass, the trail carved its way up the talus field continually offering a more spectacular view of the lake and surrounding mountains with each additional foot in elevation. Eventually waterfalls became visible and stands of golden Larches came into focus as we reached the top of the pass at 7,800ft.

Once over the pass the scenery becomes occupied by varying hues of gray granite and shimmering blue lakes, outlined by blinding white snow fields. The occasional bushy green Limber Pine emerges from a burgundy and gold blanket of alpine vegetation. It was here that we also spotted our first Mountain Goat of the day, foraging inconspicuously between two boulders. We passed by Tranquil and Isolation Lake before beginning our approach to Little Annapurna. The 8460 foot summit provided panoramic views of the state of Washington; east toward Ellensburg and the plains, south toward the I90 corridor, Cle Elum Ridge, Mount Adams and Mount Rainier and west toward Glacier Peak and Mount Baker.

We descended Little Annapurna, rejoined the main trail, and made our way out of the stark rocky Upper Enchantments and into the lush alpine meadow section of the Middle Enchantments. Here the stream drops off the barren plateau and gives way to Crystal Lake and the Ingalls Creek Valley. The changing Larches add a dash of green and gold to the landscape making for a dazzling display of color interspersed with deep red vaccinium leaves blanketing the gravely soil.

Flanking the right side of Inspiration Lake does not inspire speed, because my desire to linger in this section was strong. We paused for a photograph with the local Larch trees that have likely stood for centuries and then continued along the left side of Perfection Lake. This lake, much like the Enchantments themselves was aptly named. The immaculate waters are bordered with smooth granite cliffs to one side and golden larches on the other. A stream tumbles down from Perfection into the small pocket of water called Spirit Lake.

We continued to follow Snow Creek as it flows toward Leprechaun Lake and into the Lower Enchantments. The views continued to impress and we were even fortunate enough to spot two mountain goats – a ewe with her adorable kid – foraging on alpine grasses sprouting from cracks in the granite. We continued down the trail to Vivian Lake which was unfortunately the last of the alpine lakes. Then we reluctantly began our descent to the Snow Lakes trailhead.

We lost the trail a few times as we descended the somewhat technical trail granite outcroppings back into the subalpine fir forest. We followed the switchbacking trail down to the stair-stepping Snow Lake and then past Nada Lake down the switchbacking hillside to the parking area at Icicle Creek. Most of the day was a pleasant cool temperature but the final low elevation switchbacks were quite hot and dry and it was nice to get back to get a cool drink back at the car. Overall the effort was not more than a typical weekend hike, but the reward was the greatest yet.