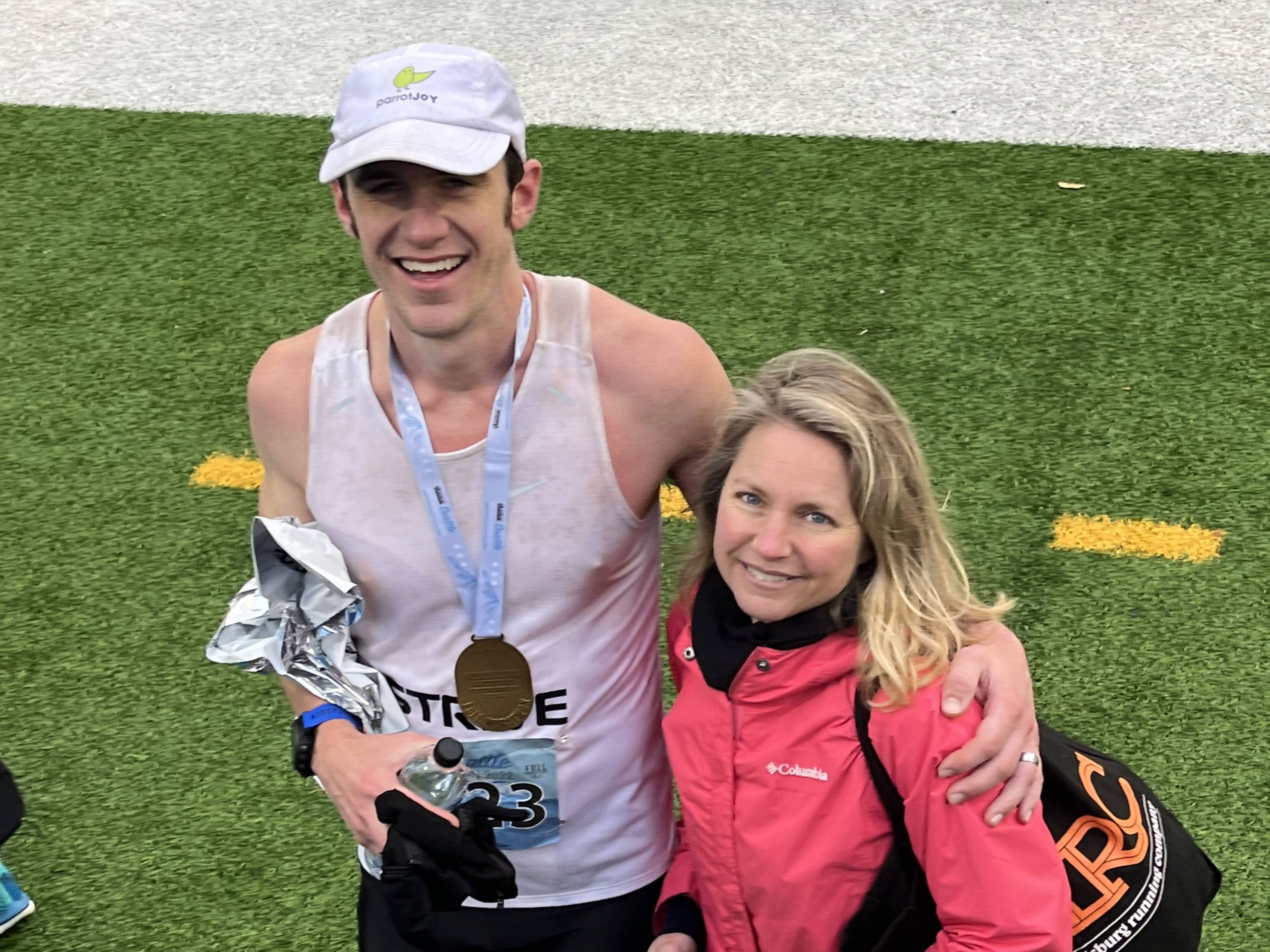 I signed up for the Seattle Marathon rather late in the year because a friend (Paul Young) said that he had an entry available. I was excited to switch gears from the trail and hop back on the road to test if my legs still had some speed. The course looked rather challenging, which I assumed would be good for my trail running background but not as good for my prospects of running a fast time.

After taking some relatively low mileage weeks following my Teanaway Country 100 miler / San Jose 50K double, I began to build my mileage again. I hit two weeks in a row with mileage in the low to mid 80s with a 21 and 23 mile long run. I mixed up the training with both road and trail and even threw in a few track workouts. I could not fully gauge my fitness but I thought I was in mid 2:40s shape which would equate to a potential 2:50ish Seattle Marathon.

My wife and father both decided to make the early morning drive to Seattle and my friend Joey Chirillo was carpooling with us. Joey kept us all entertained with an array of statistical analysis surrounding Seattle Marathon time projections en route to Husky Stadium. It was still dark at the start line but the city lights kept things fairly well illuminated. The weather was near perfect, with clear and calm skies and temperatures in the upper 30s.

There was a lot of energy at the start line, Apryle and my father were right there on the other side of the corral and runners were nervously jumping and stretching. Somer was the only runner that I recognized at the start line, we wished each other luck and chatted about time goals. I toed the line in the front row and took off in a group of three people. An early rabbit took the lead and faded after about a mile.

As I ran past the University of Washington campus prior to entering the I5 express lane, I saw Aaron Long who was on the side of the road cheering. I flip-flopped position with one of the runners in the early miles as we headed south bound on the I5 express lane. Although it was dark, the streetlights and general glow of the city kept things illuminated to the point that I did not need my headlamp (which Paul had recommended). I chatted briefly with one of the other runners as I tried to keep things light and the pace manageable. We turned around at an arbitrary point on the highway and doubled back towards the university. It is difficult to determine because satellites went out under the bridge but it seems I ran the first 5K in 18:03 and the second in 19:01 for a 37:04 10K split.

After taking the offramp from I5 I saw Bret Jorgensen who ran along side for a few minutes, it was a great morale booster and kept a strong pace as  I approached Interlaken Boulevard. There was a very short but steep hill climb which considerably slowed my pace for a moment as I passed through a neighborhood. I eventually reached a pedestrian path which traveled through a forested canopy. Finally the headlamp proved useful and I turned it on in order to better see tripping hazards. As I descended Interlaken trail the eventually winner of the race caught up to me and we ran together for several miles. Despite all the turns, hills, and dark trails, I split the next 5K in 18:30 (15K in 55:34).

We reached the turn around point near Madison Street and ran along the road paralleling the arboretum. At this point it was bright enough that the headlamp was no longer necessary. Fortunately, Apryle and my father were near the 520 bridge interchange where I hoped to see them and Apryle took my headlamp. I was traveling slightly lighter and ready to move at speed over the bridge towards the rising sun. I blew through an aid station and didn’t intend to eat, but James grabbed two gels and asked if I wanted the other. I figured I may as well and took down the gel, which my only calories of the race. In total I probably drank less than 6 ounces of water and consumed less than 100 calories, which is not unusual for me in a run less than 3 hours.

I started to notice that my legs were losing some of the zip they had in the first half of the race, but James and I confirmed that we passed the halfway mark in about 1:17:15, meaning that we were way ahead of goal paces. Additionally, the next 5K stretch that included the transition onto the bridge was an 18:14 split (20 km in 1:13:48). Fortunately the bridge was not too windy and I reached Bellevue feeling ready to tackle the final miles. Upon turning around, James pulled ahead and from that point I pretty much ran alone for the remainder of the race. The stretch westbound over the bridge was difficult because I started to encounter marathon and half marathon traffic.

After getting off the 520 bridge, the convoluted course took me over the draw bridge and then down near the UW boat storage area. Normally when I run near Union Bay Natural Area, I am focused on birding, but during the marathon I was all business. It was at this point that I saw Troy Haeseller, who ran along side and took some video and pictures while I looped around the natural area. The trail surface changed from pavement to crushed gravel complete with some mud puddles that I attempted to avoid. My pace slowed through this area, and even though I prefer trail to road, the soft surface definitely did not help with my speed. The 10K that included the bridge and Union Bay statically confirmed the slowness, I split an 18:46, followed by a painful 19:50 (35 km in 2:11:12).

My form began to falter as I approached the Burke Gilman trail and I was ready for the race to come to a close. Unfortunately the Burke Gilman trail section was a disaster, there was half marathon traffic going in both directions and other trail users on a path that was less than a car width. This also contributed to the slowing pace because I had to weave in and out of people after putting in a near maximal effort for over two hours. Things began to thin out once I reached Winkenwerder Hall and ascended to the courtyard fountain. However, the race organizers threw in one last painful out and back on the Burke Gillman before I finally descended the skyway down into Husky Stadium. This out and back did allow me to see that my current position was safe barring anything catastrophic in the final mile. The 5K segment that included the Burke Gilman was my slowest of the day – 20:50 (40 km in 2:32:11).

I knew that I would break 2:40 but I was unsure how far I would be under my previous marathon PR of 2:39:58 (Cleveland 2011). I crossed the line in 2:38:50 for 5th plae. I was very excited to know that I had finally lowered my marathon PR after over a decade, but I still wish that I had held onto a podium position after being so close to the front of the field all day. The time I ran indicated that I ran the second half marathon in 1:21:35, which was a positive split of over 4 minutes. However, on such a hilly and twisty course I was happy with the time. I was able to celebrate with Apryle and my dad in the stadium and soak in the moment on a very grand stage. The course was scenic for a city marathon, but there were definitely some serious flaws in the route planning. Overall, it was an excellent day, thank you to all the race organizers and volunteers.