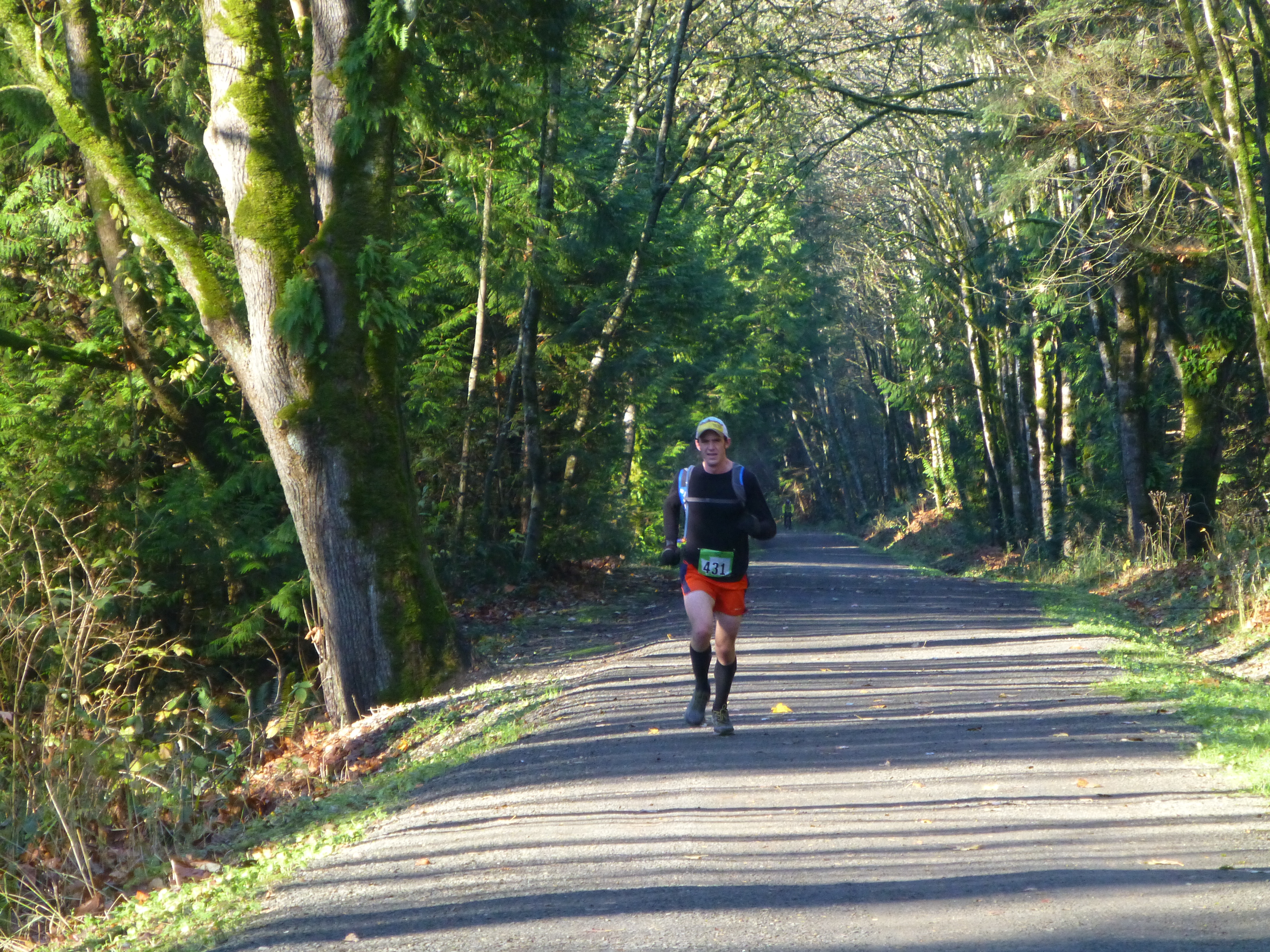 The year 2018 started full of hope and opportunity and as the racing season wore on, I became more and more discouraged. The Black Canyon 100K was thoroughly disappointing, with a subpar performance in the desert. Then the Lake Sonoma 50, what I considered to be my most successful race of all time in 2017, turned out to be an underwhelming result, finishing over an hour slower than my first attempt. In late June, the Issy 100 was a success when Christophe and I handily recorded the FKT. But towards the end of the summer I succumb to another miserable defeat with a demoralizing finish at Run Rabbit Run 100. I was set on ending my year with Run Rabbit Run and resetting for 2019, but I happened upon a sign at the entrance of Grand Ridge last week stating that there would be a 50K on November 17th. I discussed the idea of running the event with Apryle and finally made the decision to race on Friday November 16th.

Living just two miles down the street, Apryle and I reluctantly drove to the start, deciding it best to save my energy for the race. It was a cool morning, perhaps high 30s, but Apryle helped me to stay warm as we awaited the start. The first half mile is flat and easy, so I took off quick and then settled in on the first climb which is about 400 feet of switch backing trail. I relinquished the lead quite early and tried to remain on the heels of the leader, but he put a measurable time gap on me before the East Fork junction. The trail here is a narrow swath sandwiched between I90 to the south and the Highlands to the north, but the forest is dense enough to give the illusion of backcountry.

After completing the Coal Mine loop, there is a left turn onto the East Fork Trail (about 3.5 miles into the race), this trail crosses Grand Ridge Drive, where the first aid station is located. Then there is a short stint on the Sam Dog Creek Trail, before the start of the Cedar Waters Trail. The trail is wide, and though it is not technical, it is also not groomed (rocky with a good share of roots). The forest is quite dense, with Western Red Cedar dominating the tree scape and Sword Ferns occupying the understory. I kept a decent pace as the trail gradually ascended to the arbitrary high point on the trail, about five miles into the race. The course then zooms down hill to a low point at wooden bridge before Duthie Hill Park where the turn around is located about 7.8 miles into the course.

I arrived at this check point in about an hour and caught a glimpse of my competitor about 4.5 minutes ahead. I was focused on math through this section, trying to calculate goal times with corresponding landmarks. I also began to run into traffic here, which would only magnify as additional races took to the trail. I reached the start/finish area in 1:47; kissed Apryle and headed back out for the second loop (out and back). Here I noticed that there was also a strong group of pursuers behind me and the leader had maintained his gap. The second lap was frustrating weaving through dozens of runners at a time and the concentration never seemed to fade. However, everyone was courteous and the trail was wide enough to accommodate two way traffic.

In the second lap, Apryle was at the aid station, which was a pleasant surprise but unfortunately I began to lose my competitive attitude. I grew content and my pace settled in and I focused on enjoying the beautiful weather and the lush forest. I descended to the turn around and arrived in 2:53, which was about 7 minutes faster than I had hopped for at mile 20.8. Then after seeing that the leader added a few more minutes to his lead my competitiveness began to creep back and I increased my effort. I passed by Apryle at the aid station again and she encouraged me onward as I descended my way back to the start finish. The leader was ascending the Coal Mine loop as I was finishing up, which meant that he must have increased his advantage on me and I tried my best to speed my way to the turn around.

I reached the marathon mark in about 3:45, which meant that my second lap was 1:58, an 11 minute positive split. I darted back onto the final loop, deciding against the give-me marathon win in lieu of a certain second place in the 50K. I had to continue to chase, I thought I might get lucky and catch the leader. However, fatigue began to set in on the final climbs, I was relegated to a pitiful jog/hike and finished the final five miles in an abysmal 48 minutes. By the finish, the temperatures were finally warm enough to remove the gloves the sun was heating my sweat drenched clothes. It was an ideal day, I ended up running a 4:33; the third fastest time in race history but only the second fastest on the day. Although I missed the top spot, I was happy with my time and effort, especially given that I had not targeted this race in training.

In summary, after eight months of training for high profile races, my best effort of the year ended up being a local 50K coming off of my least structured and lowest mileage training block in years. At any rate, I believe that the Grand Ridge 50K is an excellent event with dedicated volunteers, solid course markings and design. Thank you to all of the volunteers at the aid stations and as always to my beautiful wife and biggest fan Apryle!